Are you afraid to be uncomfortable? Good. I find that when I am uncomfortable living a regular, everyday life, I do something about it.  I can’t sit still. I become restless and I have to do something. Anything! How about you?

In my book, It’s Your Life; Own It. No blame, No Excuses, one of the things I talk about is the importance of going after the life you really want.  I talk about how important it is to decide on what it is you want and then to plot a course to achieving that goal. I talk about how some people will talk, talk and talk about what they want and they never do anything about getting what they want. They make excuse after excuse about why it is that they can’t do something. The make every excuse as to why something can’t be done and they blame everything that they can think of as the reasons why that don’t move towards the goal.  When the real reasons may be as simple as being uncomfortable; taking a risk; doing something; anything.

Don’t you know of people who set goals and never achieve them? Me too. I have heard people say that they wanted to write a book or that they wanted to start a non-profit or that they wanted to start their own business, yet year after year, you see them and they are still saying the same things they said 3 years prior. You ask them what have they done to get closer to that goal and the answer is “nothing really.”   Have you helped someone lay out a plan to do something only to see them months, sometimes years later, and they have not done a thing? Of course you have. I certainty have.  Listen, they are happy being comfortable with the status quo; it’s that simple.

Are You A Goal-Setter or Goal-Achiever? 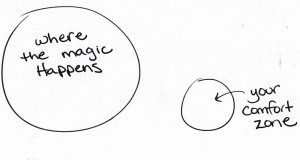 Many are comfortable living just as they are day after day. They claim that they want to do more and to achieve a stated goal, but it’s just talk.  Then there are those who embrace discomfort; they are the risk-takers. They can’t imagine living day after day just dreaming their lives away.  They would rather take a chance; they understand that failure can happen, but that does not scare them. God bless those who are happy with comfort. It’s okay if that’s what they want to do; if that’s how they choose to live. I just would prefer that they would recognize what they are doing and that they would stop talking about achieving a thing that they never intend to achieve.  I wish they would recognize that they are living a fantasy and that’s okay too because it is their lives. I just don’t want them acting like the victim.  It’s okay but it’s not what I want for my life and that’s okay too.  I prefer to embrace being uncomfortable.  I prefer taking risks. Because by doing so, I have stretched beyond my wildest dreams. I have accomplished things I never thought possible.

The challenge here is to decide what you want out of life.  Recognize that most who are successful, take risks. They have learned to embrace the unknown and the uncomfortable.  Remember, we all like the familiar; we all want to live in comfort, but what’s frightening about that is that I will end up living a status quo life. I am terrified that each day will become mundane and that I will wake up one day and would have not experienced so much that God placed inside of me.  I would encourage you to think about what’s holding you back.  Is it that you are happy nursing what you are comfortable with or are you willing to take a risk and do something that you have always wanted to do?  Guess what? It’s up to you.